Summary. For the first time, the study of morphology and biology of four cultivars of the genus Rubus: Rubus loganobaccus L.H.Bailey – ‘Tayberry Medana’, ‘Tayberry Buckingham’,’Logan’,’Lincoln Logan’ was conducted in the conditions of the Republic of Moldova. Drought tolerance and tolerance to the unfavorable conditions were identified. The data from the study shows that the cultivars ‘Tayberry Medana’ and ‘Lincoln Logan’ are more drought-resistant than ‘Tayberry Buckingham’ and ‘Logan’. For hybridberry cultivars taken in the study, it is specific that the upper epidermis is thicker than the lower. Morpho-anatomical structure of the leaves was studied by using the Micros (Austria) and Zeiss Jena Ergaval (Germany) binocular optical microscope.

Breeding tolerant and high-yielding cultivars with high quality fruits of the genus Rubus are topical issues that Food and Health Programme of the Republic of Moldova is meant to promote to resolve. Hybridberries are one of these cultures new for our country that should be proposed in order to reach the goal of the Programme [16]. Hibridberries are a cross between raspberry and blackberry, like ‘Loganberry’ and ‘Tayberry’.

‘Loganberry’ was derived from a cross between Rubus ursinus ‘Aughinbaugh’ as the female parent and Rubus idaeus ‘Red Antwerp’ as the male parent. ‘Tayberry’ is a quite similar, raspberry-blackberry hybrid that was formed by the crossing of the octoploid blackberry ‘Aurora’ with a tetraploid raspberry pollen parent known as 626/67. This variety resembles the ‘Loganberry’ in some respects, but is superior to it with respect to fruit size, yield, fruit color, mode of presentation of fruit. ‘Tayberry’ fruit are cone shaped and are a reddish-purple color when ripe. The fruit is sweeter, much larger, and more aromatic than that of ‘Loganberry’ [20,21].

Berries, especially members of familie Rosaceae (raspberry, blackberry), belong to the best dietary sources of bioactive compounds (BAC)[ 3,5, 9,13]. They have delicious taste and flavor and economic importance because of the antioxidant properties of BAC. The bioactive compounds in berries contain mainly phenolic compounds (phenolic acids, flavonoids, such as anthocyanins and flavonols, tannins) and ascorbic acid. These compounds, either individually or combined, are responsible for various health benefits of berries, such as prevention of inflammation disorders, cardiovascular diseases, or protective effects to lower the risk of various cancers [3,13].

To increase the diversity of food production, especially in years with abnormal weather conditions, a plan for introduction of new crops was sustained in the Republic of Moldova. In recent years the market of Moldova increased the requirement for the assortment of cultivated plants, that fact leaded to the introduction and cultivation of new species and varieties of plants, thus directly contributing to resolving Food and Health Programme of the country. Creation of industrial plantations of shrubs of productive cultivars in Moldova is an imperative of nowadays, which is part of the realization of this Programme. The necessity for the cultivation of these plants comes from the increasing interest for the fruit shrubs. One of these cultures is the hybridberry.The objective of the work is to conduct a study of the morphological and biological features of some cultivars of the Rubus loganobaccus L.H.Bailey in order to reveal promising material to be proposed for farmers in Republic of Moldova and also that could be proposed for breeding.

For all the cultivars except for ‘Tayberry Medana’ and ‘Tayberry Buckingham’, it was necessary to be introduced into the in vitro culture (i.e. in axenic (sterile) environment), but firstly it was necessary to root the cuttings from NCGR , for what, the growth regulator IBA(indolil butiric acid) was used.

The plants used for anatomical investigations were obtained in Biotechnology and Embryology Laboratory of National Botanical Garden (Institute) “A. Ciubotaru” by in vitro micropropagation, after being passed through the ex vitro adaptation to the aseptic conditions and planted in the open field.

In the study were taken fresh leaves as well as leaves dried at room temperature. The anatomical study was conducted according to the classical methods [8,10,14]. The microscopic examination was performed at the binocular optical microscope Micros (Austria) at 16x and 40x magnification, on the cross sections obtained from fresh and dried leaves and superficially preparations, cleared with chlorhydrate or 3% NaOH [10] and at the binocular optical microscope Optika (Italy) at 10x magnification. The measurements of anatomical structures were performed on cross sections and superficial preparation of epidermis, at 16x magnification at the binocular optical microscope Zeiss Jena Ergaval (Germany). The results of the determinations were statistically processed using the Microsoft Excel application of the Office 2007.

‘Tayberry Medana’. It is clearly seen in the leaf superficial preparation and cross sections that the upper and lower epidermis are singled-layered with polygonal cells. The epidermis is covered by a layer of cuticle. The cells have the external walls thickened, but not much (fig.1A). On the superficial preparation of the upper epidermis, cells with wavy walls were observed (fig.1D). The lower epidermis develops unicellular trichomes which have a thick membrane (fig.1C). The upper epidermis also has trichomes but on the lower epidermis the pubescence is more pronounced. The stomata are of the anomocytic type. Across the mesophyll pass collateral closed bundles with sclerenchymatic sheath. Mechanical, collenchyma tissue was observed in the region of the ribs. Druses of calcium oxalate are present (fig. 1B). 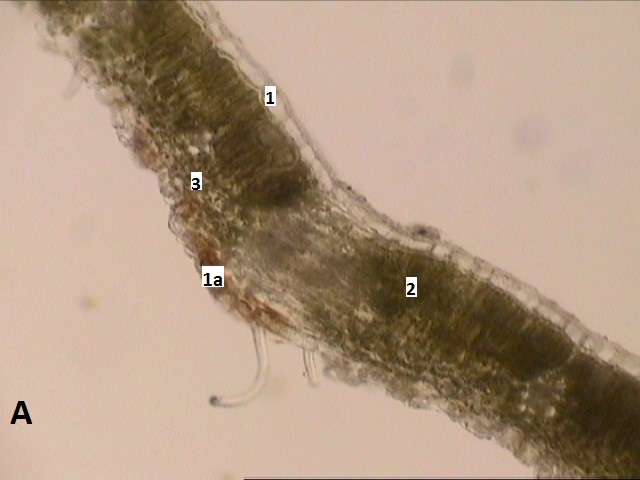 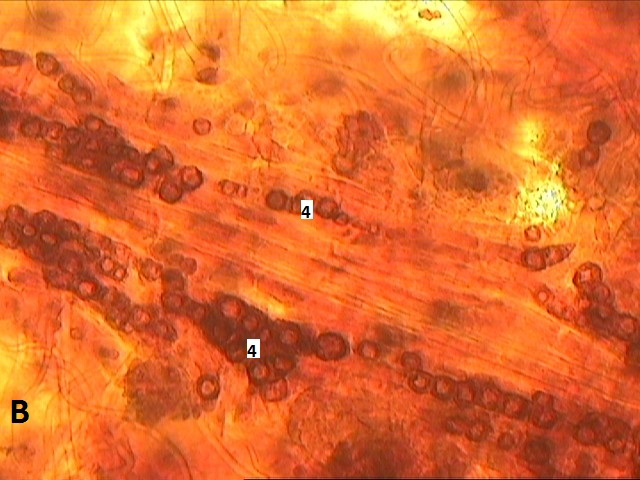 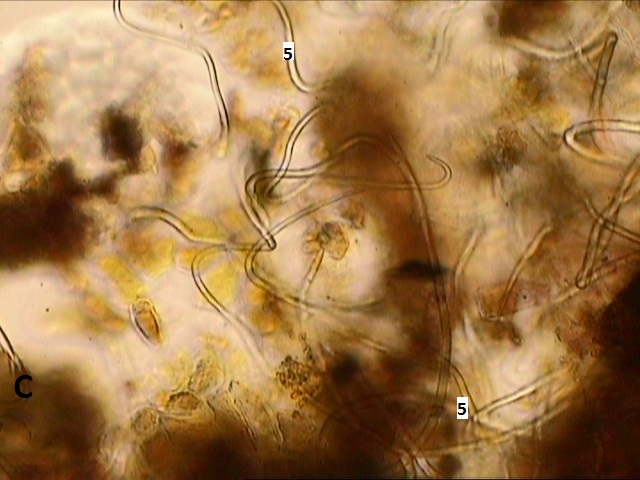 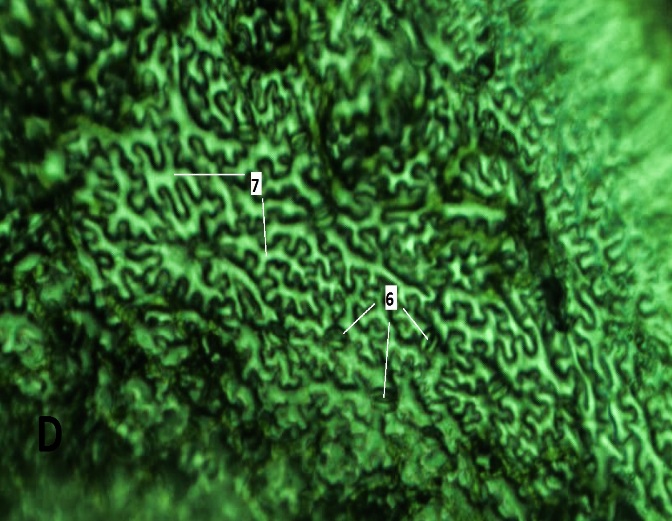 ‘Tayberry Buckingham’.The pubescence is evident, with unicellular, solitary trichomes, long and slightly curved, entwined and fixed in the basal socket (fig.2 C,D). Epidermal cells are isodiametric. On the superficial preparation of the upper epidermis, cells with wavy walls were observed (fig.2B). The palisade tissue of the mesophyll consists of two rows of cells, elongated, arranged under the upper epidermis, and the spongy tissue consists of parenchymal, and lobed cells with spaces between them (fig. 2A) and this is characteristic for all four cultivars. 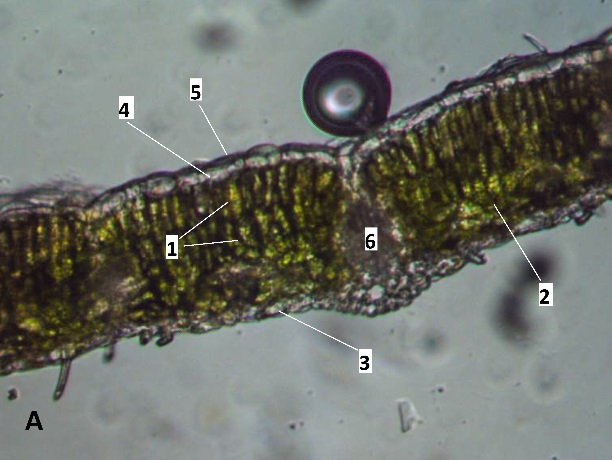 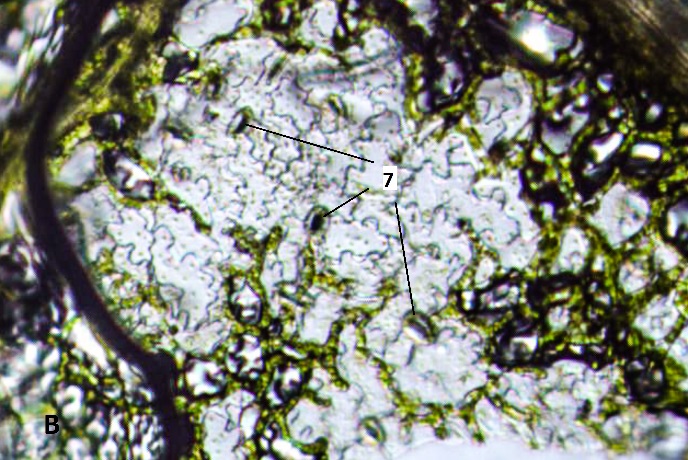 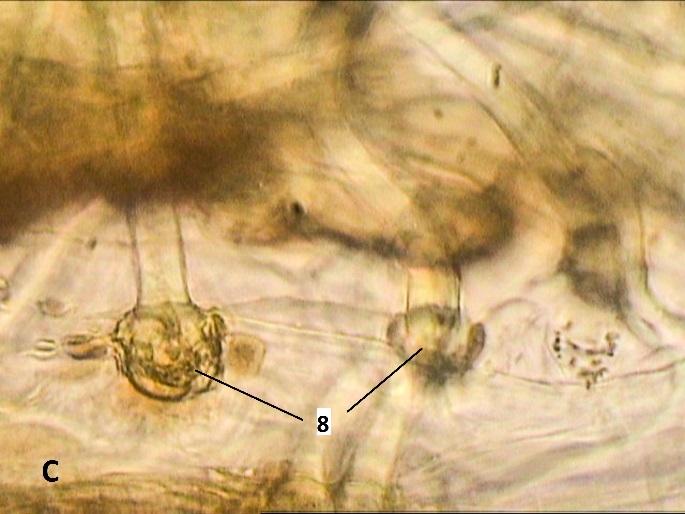 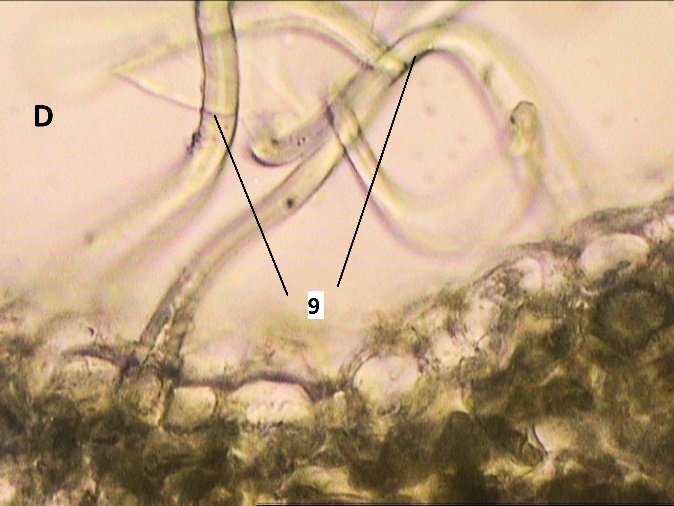 ‘Lincoln Logan’. The anatomy of the leaf of ‘Lincoln Logan’ cultivar is characterized by the presence of trichomes, same as for the other hybridberry cultivars: in general the trichomes are solitary, sharp at the peak, long and unicellular, with a rounded base, which is included in a multicellular socket with browning content, and basically the trichomes are relatively large (fig.3 B,C,D). The druses of calcium oxalate are also present (fig.3B). The mesophyll with the palisade and spongy tissue are very good represented on the figure 2A at 40x magnification. 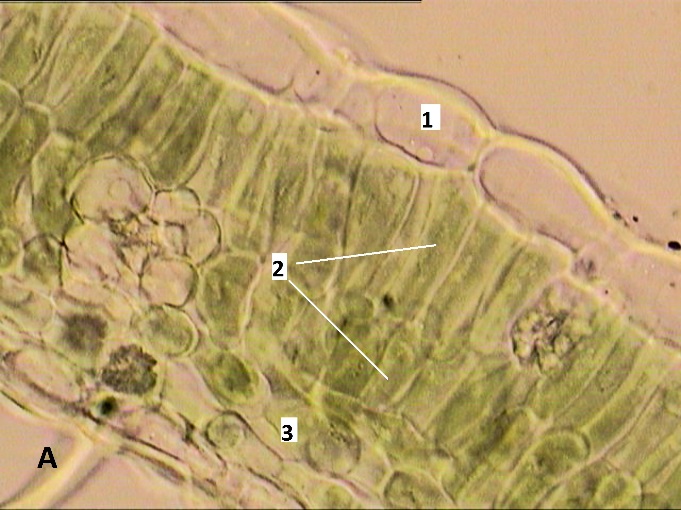 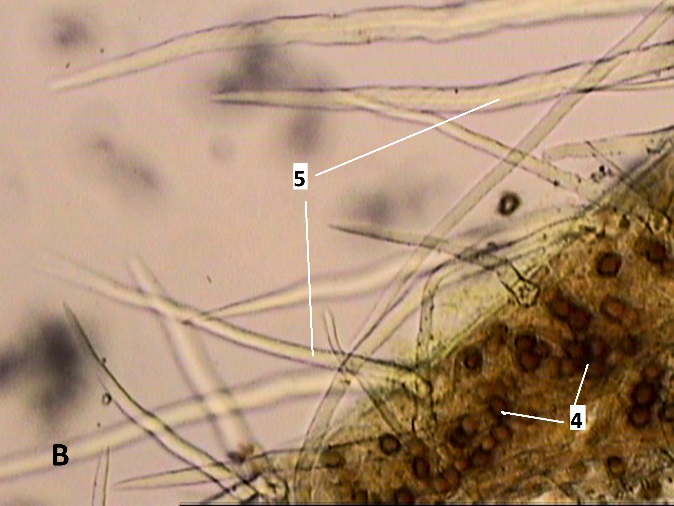 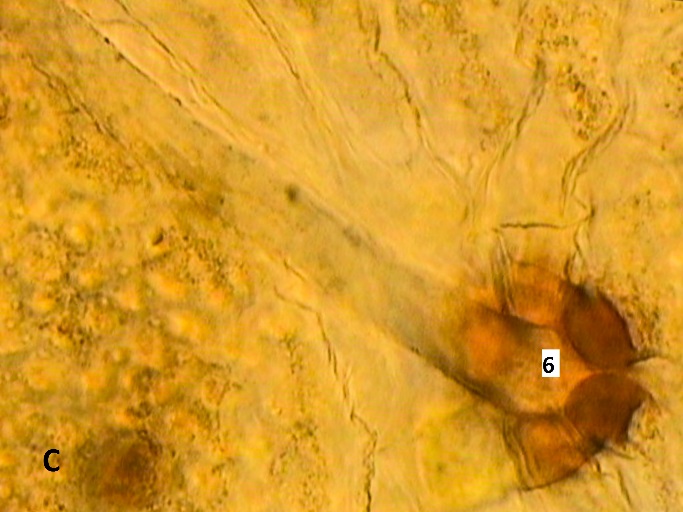 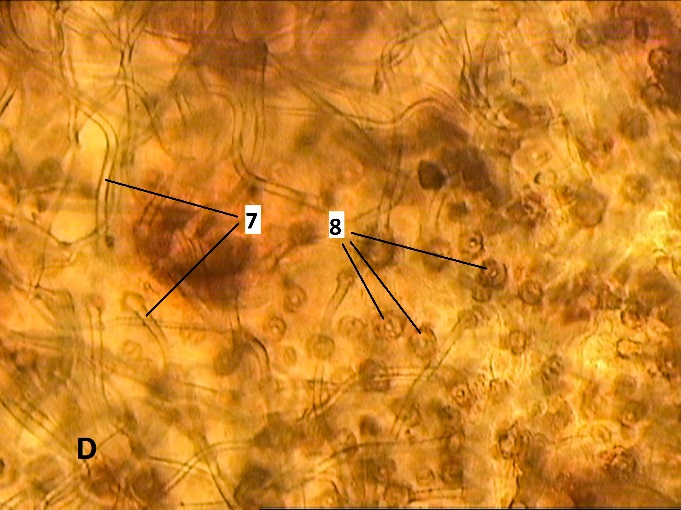 ‘Logan’. The upper epidermis is well developed and thick, the anatomical structure of the leaf is of dorsal-ventral type, palisade tissue cells are elongated, arranged in two rows with small intercellular spaces, spongy parenchyma cells are lobed with large intercellular spaces (fig.4A). The lower epidermis of the leaf has a pronounced venation. The upper epidermis and the lower epidermis have well packed cells that are slightly flattened. In the figure 4B there is clearly seen how the cuticle penetrates between the cells of upper epidermis. The calcium oxalate druses are arranged in the sheath of the vascular bundle, there are a presence of cells with druses of calcium oxalate along the veins and in the mesophyll (fig.4C,D). 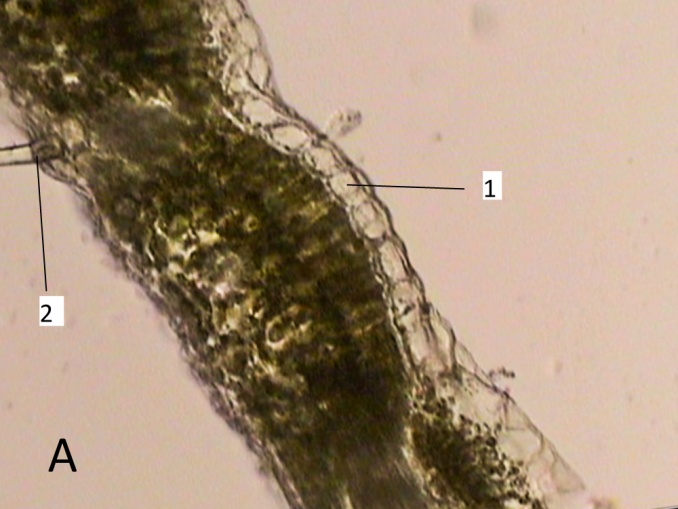 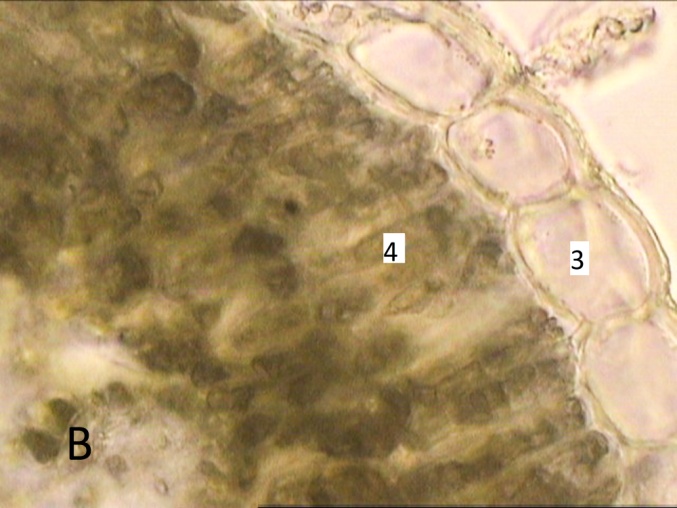 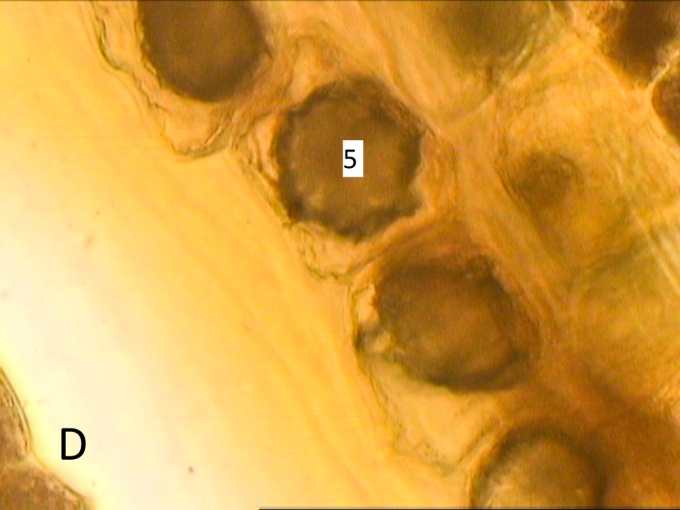 The determination of resistance to drought by calculation of stomata. Although in botanical literature the role of stomata density (the number of stomata per unit of foliar surface) in determining the resistance of plants to the drought is appreciated differently, however some authors like Green N. [4] state that plants adapted to dry conditions have in general a much smaller number of stomata.

The thickness of leaf histological elements.The photosynthetic apparatus also adjusts to the light [17,18, 19]. It has been found that the shading of the leaves of some species of plants, for example of the grapevine leads to disruption of their normal anatomical structure and the disruption of the structure of plastids.

S.I.Shiraishi have determined that the thickness of the leaf, dry matter per unit of leaf area, percentage of dry matter and density of stomata per unit of leaf area of some cultivars of grapevines cultivated on a light of 25 klx are higher than those species and varieties when grown at a light intensity of only 10 klx [12]. They have noticed that these leaf characters depend on the variety, but it is not a clear trend.

As the plants from open ground are located on a plot that is not fully exposed to the sunlight, from the tables 2 and 3 it can be seen the clear tendency for the thickness of the leaf to have o lower value for this plants.

The thickness of leaf histological elements of young plants from greenhouse

Thickness of leaf histological elements of plants from open ground

Leaf of plants of the genus Rubus has dorsoventral structure. The degree of differentiation of palisade mesophyll; the ratio of palisade and spongy mesophylls differ, depending on the plant species and habitat features. Xeromorphic leaves tend to have more highly developed palisade tissue than mesomorphic leaves do.

It is known that the thickness of the epidermis determines the protection of the leaf mesophyll [2,6,11,15], and the increased value of the correlation between the thickness of the upper and lower epidermises for genus Rubus is a measure of adaptability to adverse conditions, especially resistance to drought, cold and radiation, which have been very pronounced during the last two decades [1, 7].

For hybridberry cultivars taken in the study, it is specific that the upper epidermis is thicker than the lower.

The author would like to thank PhD Chiru Tatiana and undergraduate student Vornicoglo Maria from the State University of Medicine and Pharmacy “Nicolae Testemiţanu” for the assistance in performing the morpho-anatomical study.