Mechanical tests of samples with various hydrogen concentrations как before так and after the hydride reorientation tests were performed.

The results obtained and the information search conducted allow a prediction on the risk margin due to SNF cladding degradation related to the phenomena induced by presence of hydrogen accumulated in the Zr-1%Nb alloy FR cladding during operation.

For many years Zirconium-base alloys has been used for the cladding of the fuel rods and structural components of fuel assemblies in water cooled power reactors, like pressurized water reactors (PWRs, VVER), boiling water reactors (BWRs, RBMK) and pressurized heavy reactors (HPWRs) [1] Upon completion of their operation, fuel rods remain internally pressurized [2, 3] and retain a number of degrading factors, such as hydrogen, accumulated during operation [4].

Degradation phenomena induced by presence of hydrogen in zirconium include:

— hydrogen embrittlement (HE), which is a significant decrease in ductility caused by hydrogen uptake [5, 6];

— delayed hydrogen cracking (DHC), which is gradual crack growth caused by discrete cracking along the hydrides formed at its tip [7, 8, 9];

Traditionally, the cladding tube manufacturing predetermines their proneness to formation of circumferentially (tangentially) oriented hydrides. The potential for hydride embrittlement of cladding fuel rods may increase drastically if the hydride platelets are reoriented from their normal circumferential to the radial direction of the cladding [12, 13, 14]. Hydride reorientation can occur as a result heating during the vacuum drying process in which the cladding temperature can reach up to 450 C, causing the hydrides to partially or completely dissolve. During subsequent cool-down, the hydrogen in solid solution can re-precipitate as radial hydrides if the hoop stress caused by the end-of-life internal pressure of the tangential stress exceeds the threshold stress level for the formation of radial hydrides [15].

By the end-of-life, the fuel rod internal pressure under the cladding, depending on the initial pressure (2.0…3.45 MPa), in the PWR rods at a room temperature is 4 …6 MPa [2, 16]. The dependence of the end-of-line pressure versus burnup (Bu) can be stated as follows

where Pend are internal fuel rod pressure at end of life; Bu is burnup in MWD/kgU, 2.8781 – mean initial pressure under the shell (fitting parameter).

According to US NRC requirements, the following criteria shall be met to guarantee fuel rod integrity during SNF handling and long-term storage [16, 17]:

— tangential stress in the fuel rod cladding at 400 C should not exceed 90 MPa;

— hydrogen concentration in the fuel rod cladding should not exceed 400-500 ppm.

The amount of hydrogen accumulated in Zr-1%Nb alloy during six years of operation (70 MWD/kgU) is 50…60 ppm and does not exceed 80 ppm; hydrides up to 80 microns long predominantly are tangentially oriented [18]. Due to such low hydrogen concentration, no limit was set for hydrogen uptake previously, however at present a design limit of 400 ppm has been implemented to match U.S. and western design criteria [17, 19].

This paper describes the hydrogen reorientation tests simulating the temperature mode and stress condition of Zr-1%Nb dummy claddings with hydrogen concentration up to 400 ppm and different scenarios of SNF handling and storage.

The cladding used in the present study was non-irradiated Zr-1%Nb cladding tubes in the delivery condition (finish annealing 580 C, 3 hours); their main parameters are shown in Table 1.

Hydride reorientation tests were performed on internally pressurized dummies with Zr-1%Nb cladding (Fig. 1). The overall dummy length was 112 mm, with the gas-filled cavity length of 66 mm. The gas (helium) pressure under the cladding was from 3 to 5 MPa.

The test temperature mode was based on SNF handling safety criteria.

— the fuel rod peak cladding temperature operated in the fuel assemblies for the normal long-term dry storage in the helium environment is 350 C;

— for extreme weather conditions and during SNF handling the temperature may rise to 450 C for not more than 8 hours during the entire handling and storage period.

Changes in the cladding temperature of SNF fuel rods with 1 kW decay heat for long-term storage in the ZNPP SNF Dry Storage are shown in Fig. 2. The peak fuel rod clad temperature at the beginning is 349C (Fig. 3) and decreases with time. In 5 years this temperature will equal 275 C, and in 45-50 years it will reduce to 180 C.

The temperature mode during tests simulating handling conditions (Mode 1) is shown in Fig. 3.

The stressed condition of both SNF fuel rod claddings in long-term storage and dummy claddings during tests is described by the following equations:

It should be noted that in these tests the stressed condition of the dummy cladding changes with temperature according to the Charles law, just like on the fuel rod cladding during handling and long-term storage.

Changes in tangential stresses in the dummy claddings under pressure of 3, 4, and 5 MPa during tests in the mode simulating fuel handling and normal operating conditions are shown in Fig. 3. 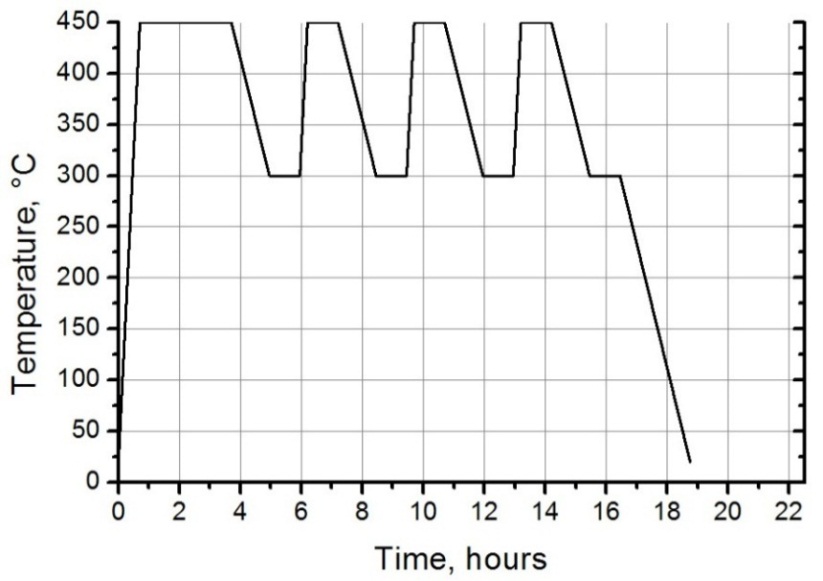 The metallographic examinations were done using the optical microscope “Axio Observer.A1m”. The metallographic structure images were used to determine the hydrogen concentration and the hydride orientation coefficient.

The hydrogen concentration was determined by the area taken by hydrides in the sample transverse cross-section [22, 23]: 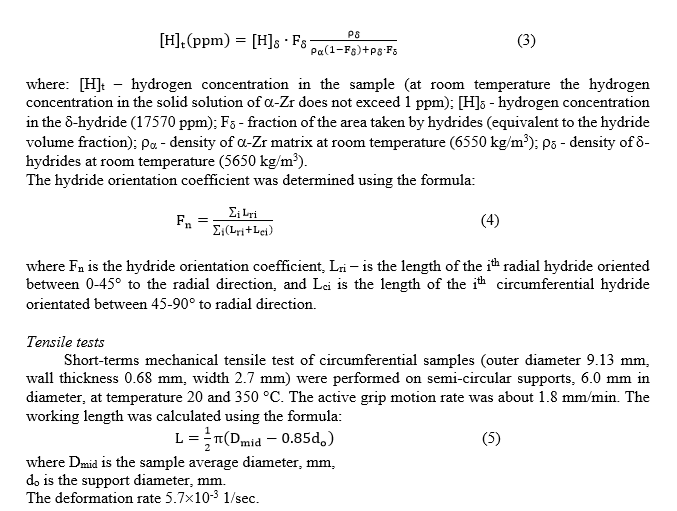 During the tests, depending on the concentration, the hydrides which initially had a technology-induced orientation relative to the main directions in products (for tubes: radially, tangentially, and axially) dissolve completely or partially, whereas the subsequent cooling releases hydrides whose orientation is to a significant degree determined by the active stresses. Hysteresis exists between the temperature of full hydride dissolution (TSSD) during heatup and the temperature of their precipitation during cooling (hydride precipitation requires some subcooling). The hydrogen concentrations at hydride dissociation temperatures ([H]TSSD) during heatup and at the beginning of hydride precipitation during cooling ([H]TSSP) in Zr-1%Nb alloy (M5) are determined by the equations [24]:

The dependence of hydride dissociation temperatures in Zr-1%Nb during heat up (TSSD) and their precipitation during cooling (TSSP) are shown in Fig. 5. 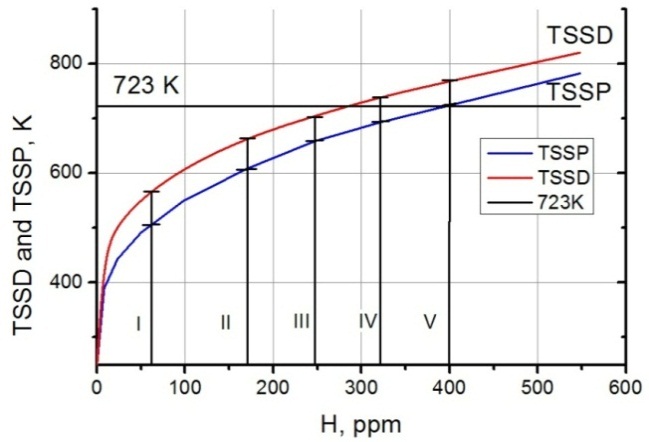 Fig. 6 – Hydride microstructure in the dummy (Zr-1%Nb) claddings before and after the hydride reorientation tests in the mode simulating fuel handling in the SNF dry storage (on the right)

Table 2 – Hydride reorientation coefficients in the dummy claddings tests in the mode simulating fuel handling in the SNF dry storage (single cycle heating to 450 °C, holding for 8 hours and subsequent cooling to room temperature (according to regime 1)). 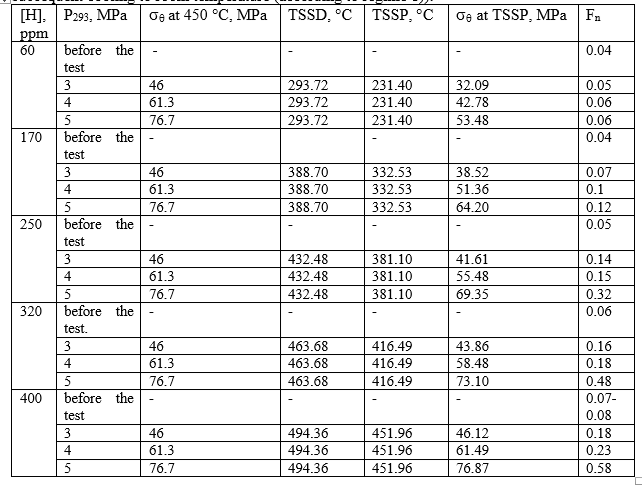 The results obtained (Fig. 6, Table 2) evidence that the dummy tests under the pressure of 3, 4, and 5 MPa in the mode simulating fuel handling and normal storage conditions do not lead to hydride reorientation in the claddings with low hydrogen concentration (60 and 170 ppm (Fig. 5)), whose hydride dissociation and precipitation temperatures are well below 450 C. This may be related to low stresses in the dummy claddings at the temperature of precipitation onset of low-hydrogen concentration hydrides. At hydrogen concentrations of 250…400 ppm, with a pressure increase from 0 to 4 MPa, the hydride orientation coefficient increases only insignificantly, but rises dramatically with a pressure increase from 4 to 5 MPa (Fig. 6, Table 2). Zr-1%Nb cladding propensity towards radial hydride formation under internal pressure increases with the hydrogen concentration growing from 250 to 400 ppm, which is in good qualitative agreement with the dependence of tangential stress in the dummy claddings at the hydride precipitation temperature (TSSP) (See Fig. 5).

For illustration, Fig. 7 shows the dependence of the hydride orientation coefficient versus tangential stress at 450 C for the dummy claddings (Zr-1%Nb) with a hydrogen concentration of 400 ppm (TSSP=451.96 C), tested in the mode simulating fuel handling and normal storage conditions in the SNF Dry Storage, as well as in the modes with three, five, and seven thermal cycles 300-450 C. 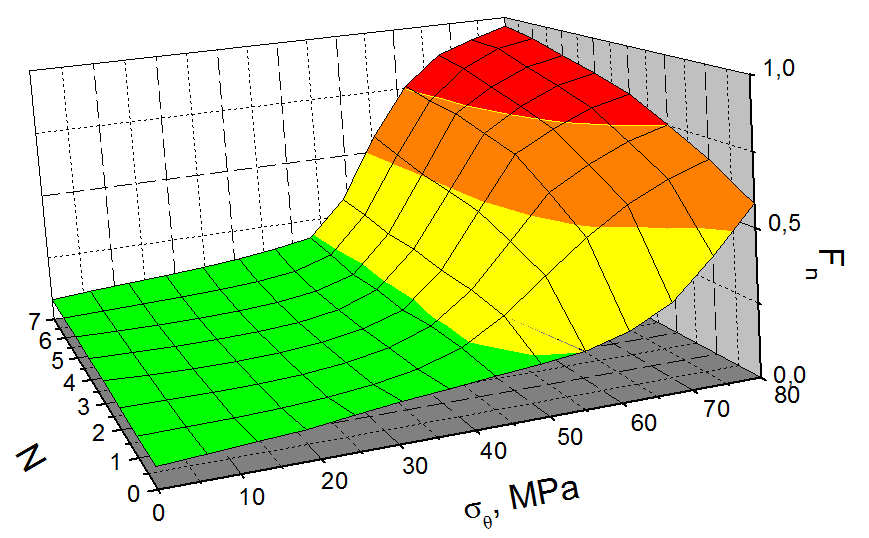 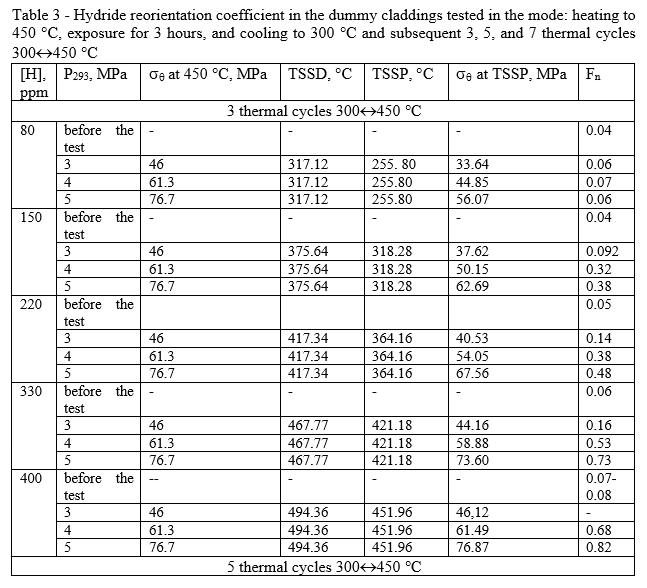 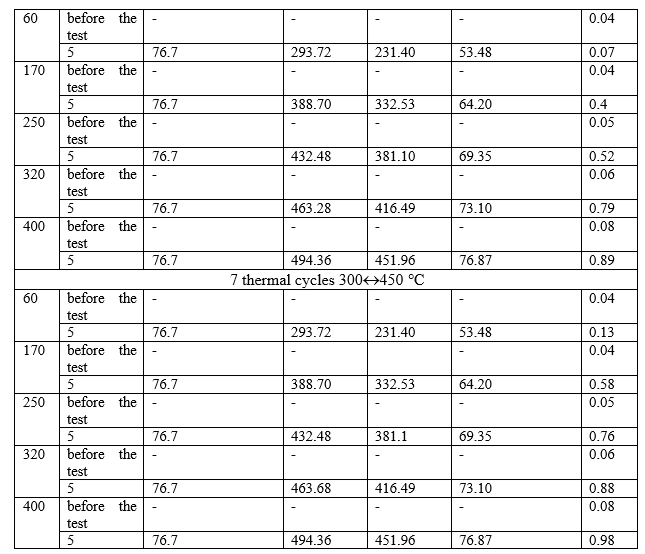 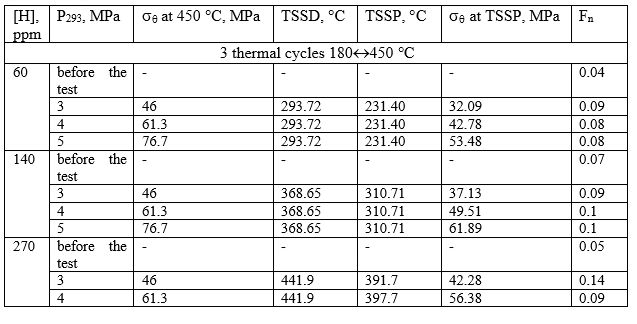 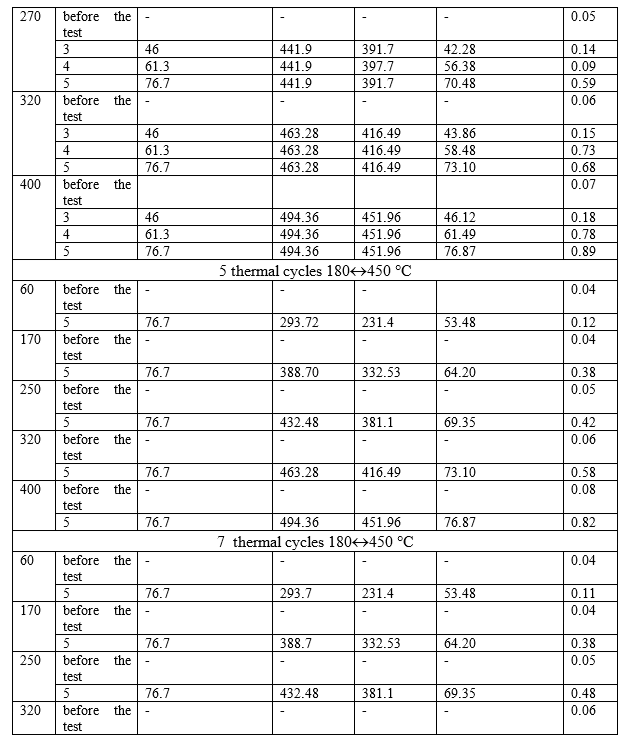 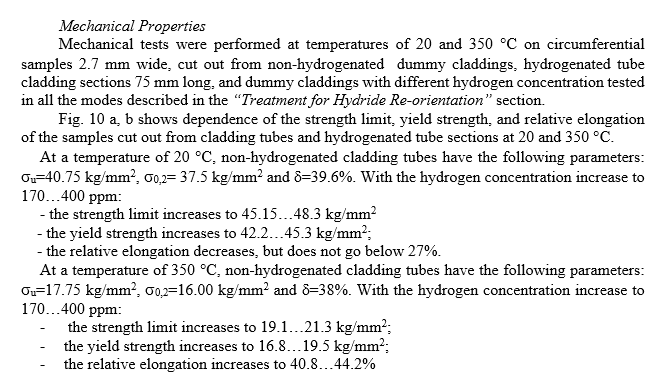 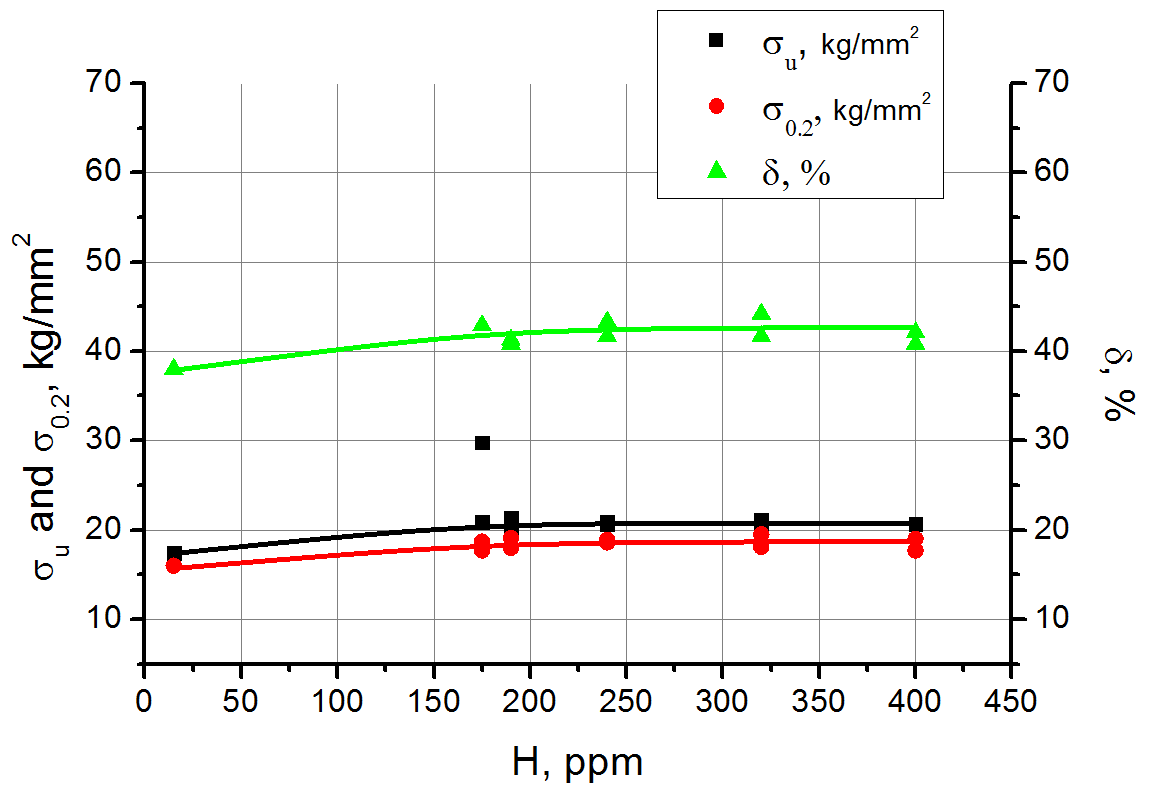 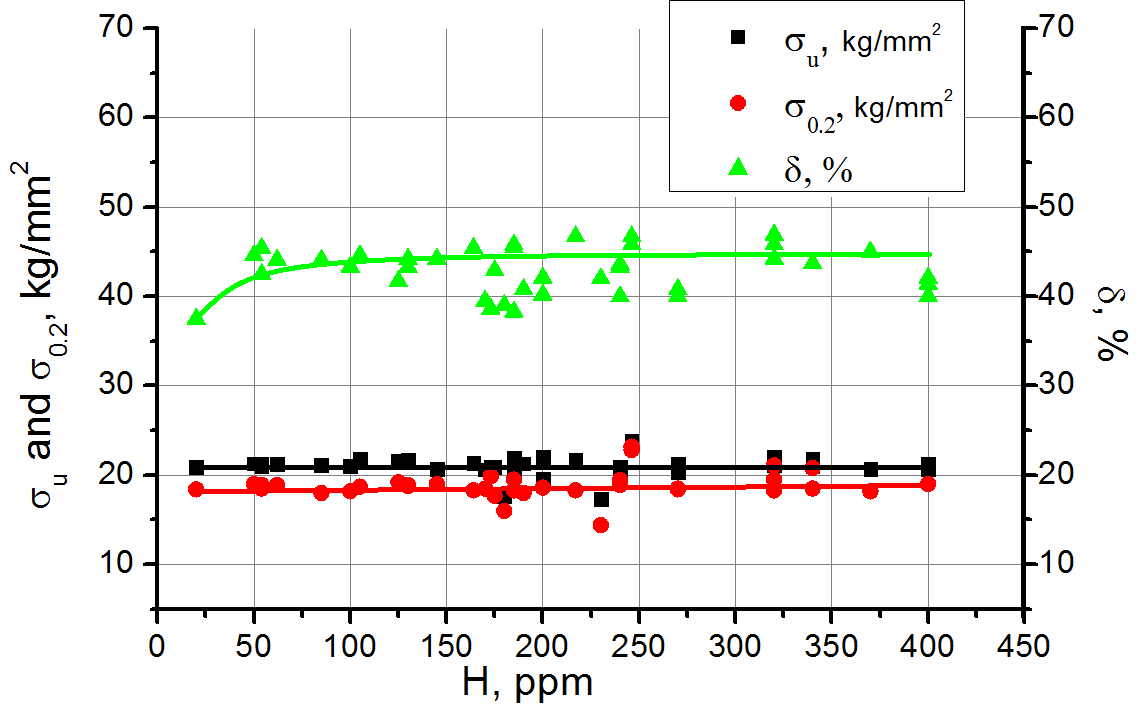 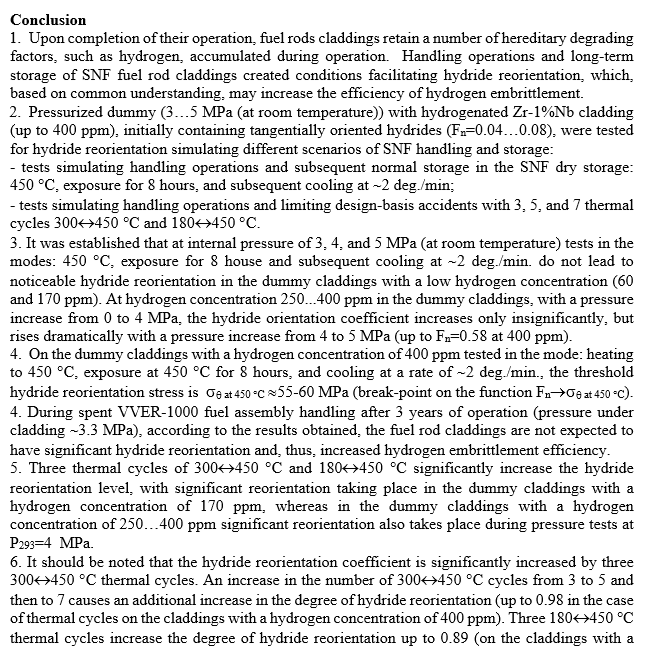