This article deals with the problem of the stability of a dump truck vehicle both during unloading and while driving. Analysis of recent studies has been conducted. That allowed us to establish operating modes at various values of the angle of inclination of the reference surface of motion. The question can finally be solved only by applying numerical methods and mathematical modeling, becoming a link in the next scientific research.

Almost everyone has at least a vague idea what the terms stability and instability mean, but these ideas are often not precise enough for use in studying vehicle stability. Even engineers dealing with dynamics often use the terms in relatively imprecise ways that are nevertheless often useful. For example, in vehicle stability discussion, one often encounters the concepts of static and dynamic stability [1].

Stability and throughput are one of the most important factors in the performance properties of dump trucks, on which the safe use and further operation of the vehicle when performing transport and unloading operations depends.

• when driving at high speed in sharp bends;

• due to the abrupt termination of the side skid when a rear wheel hits a obstacle;

• in case of uneven arrangement of cargo in the back of a car or its movement on a turn, etc.

All of the above fully applies to dump trucks [3]. In addition, for this class of vehicle there is a risk of loss of stability of the vehicle during its unloading. Operating experience has shown that when unloading dump trucks on prepared flat sites, there is no separation of the wheels from the road bed [4]. The car overturns most often when unloading on inclined platforms. Moreover, the unloading site can have both longitudinal and transverse slope. In this regard, the main task in calculating the stability of the vehicle in such cases is to determine the maximum allowable angle of inclination of the unloading site, as well as the loads acting on the vehicle’s carrier system.

Analysis of research and publications

With the help of S.N. Pischov’s experimental research we have data on longitudinal and lateral stability indicators, which allow us to determine the tilting and sliding angles of prototypes, that is, dump trucks that participated in the experiment, namely MAZ-5516W4 and MAZ-4381, when performing transport and unloading operations. [6]

Longitudinal stability of the dump truck

Consider the scheme of unloading a dump truck on a longitudinal slope (Fig. 1). 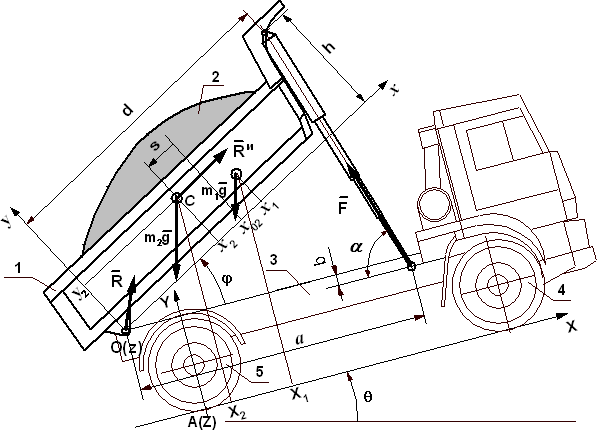 Fig.1. The design scheme of unloading a dump truck on the site with a longitudinal slope.

When lifting the platform when the total angle of the platform (j + q) becomes equal to the angle of repose, the load is set in motion. Let the cargo move as a monolithic block, symmetric about the plane of symmetry Oxy of the vehicle [7].

In the case when the inclination angle of the platform exceeds the critical angle, the front wheels are torn off from the unloading platform. In this case, the reaction of R1 goes to zero and equation finally takes the form:

However, to obtain an analytical expression for calculating the critical angle from equation (1) is not possible. That’s why we apply the procedure of step by step change of parameters. For this by and by ∆θ = 0.5º, increase the angle of the unloading platform. At each step, changing the angle φ, model platform lift. When the sum of the angles (φ + θ ) becomes equal to the angle of repose the movement of the cargo begins Substituting the obtained values into equation (1), we check the condition of the front wheels. If the sum of the moments included in equation (1) is less than or equal to zero, then the angle of the platform has reached a critical value and the truck will overturn. Otherwise, increment the angle θ and the procedure is repeated.

Loss of stability of the truck can be observed during unloading on the cross slope. An analysis of modern methods for assessing the lateral stability of dump trucks has shown that the solution of this problem is developing in two directions [8].

Another approach to solving the problem is based on the use of computational research methods. However, this requires the creation of a complex mathematical vehicle model. Such a model should take into account the design features of the suspension guide, the nonlinearity of the elastic suspension elements and tires, as well as the possibility of plastic deformation of the supporting system during torsion. In this formulation, the problem can be solved only with the use of numerical methods and is the subject of serious scientific research.

Note that the development and debugging of a similar vehicle model requires not only considerable time, but also the coordinated work of a team of high-class engineers. However, these costs can be justified, since the created model can also be used to calculate the dynamics and strength of the vehicle.

The article deals with the problem of stability of the dump truck during unloading on the site with longitudinal and transverse inclination. A procedure for step-by-step change of parameters for calculating the critical angle of inclination of the site is proposed. On the basis of the developed methodology, a program has been compiled for calculating the longitudinal stability and cargos acting on the carrier system of dump trucks. It is noted that to assess the stability when unloading a dump truck on a transverse slope requires the development of more complex non-linear models. This problem may be the subject of further scientific research.

The proposed approach allows already at an early design stage to carry out multivariate calculations of the dump truck for strength and stability in order to select the optimal design solution.